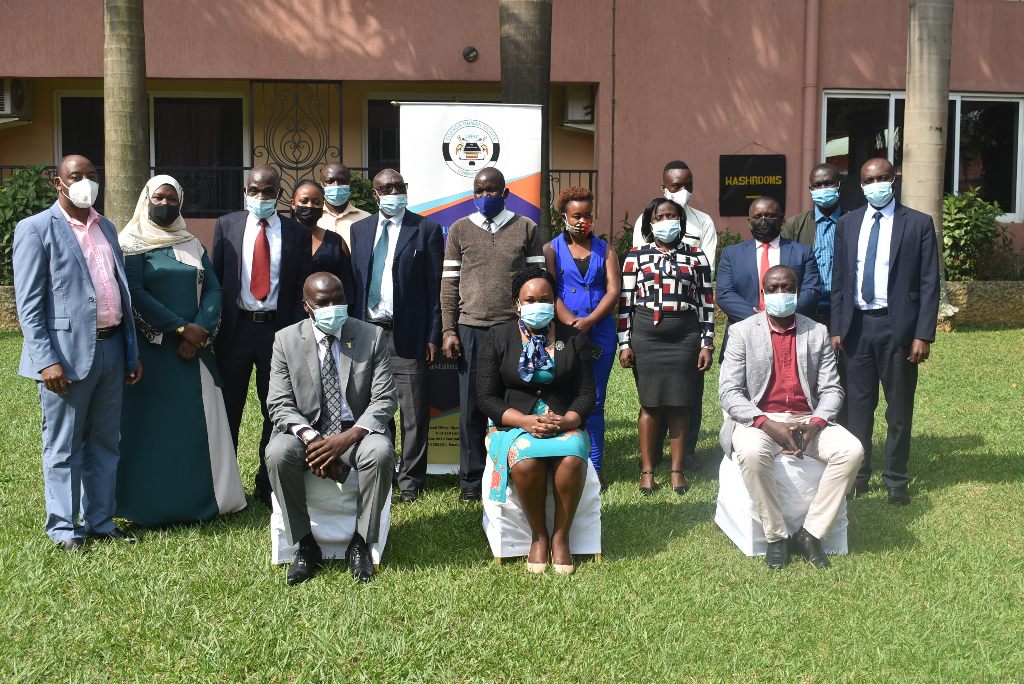 The Uganda Human Rights Commission (UHRC) trained Councillors and Mayors of the five Divisions of the Kampala Capital City Authority (KCCA) in drafting Human Rights Compliant Ordinances. Through its Central Regional Office, the Commission specifically trained the political leaders in the development of an ordinance to eliminate violence against women and girls. The training which took place at Imperial Golf View Hotel, Entebbe on Tuesday 31st August 2021 was facilitated by the United Nations Development Programme (UNDP) under the European Union (EU) Spotlight Initiative Project.

While officially opening the training Commissioner Meddie B. Mulumba the Acting Chairperson said cases of gender based violence and indeed violence against women and girls have been on the increase over time and the COVID 19 pandemic has worsened the situation. He particularly noted the current increasing cases of domestic violence, early child and forced marriages, child labor, teenage pregnancies, high school dropouts and child neglect/desertion.

“Although both male and female gender have been affected, detrimental impact resulting from Gender Based Violence has visibly been noted amongst the female gender. And Despite the existence of a relatively enabling legal framework in the country on protection of the rights of women and girls, KCCA does not have a specific legislation on prevention of gender based violence; which we believe, is key in eliminating this form of violence,” he pointed out.

He revealed that the decision to draft this ordinance was as a result of a series of activities conducted by the Commission through its Central Regional Office in conjunction with KCCA. He hailed efforts by the Commission which he said had conducted capacity building trainings of selected KCCA Technical Officers, in November 2020 and later in May 2021. “As a result, KCCA technical officers subsequently conducted community consultative meetings with community leaders and some community members both at community and Division level in all the five Divisions of KCCA. The need for a specific ordinance to prevent and prohibit Gender Based Violence came out very strongly during the community consultative meetings thus leading to the development of a draft ordinance which is going to be presented today,” he said. The ordinance was developed by key technical experts from the Ministry of Justice and Constitutional Affairs and Ministry of Gender, Labor and Social Development in close collaboration with KCCA technical officers.

The Deputy Lord Mayor Ms. Doreen Nyanjura who was in attendance lauded the development which she said was a celebration on the part of the women who will now have a specific law prohibiting violence against them. “I am a human rights activist and specifically a women rights activist especially for the downtrodden women and the differently abled. Much as I am celebrating this coming ordinance, it is unfortunate that unlike men, we as women we have had to fight for our rights,” she said. She further observed that though Gender Based Violence cuts across gender, women are the most violated. She regretted that whereas the laws against GBV are in place, they have not been specific enough for effective use by KCCA.

Godwine Gumisiriza, the Manager Community Services at KCCA who said the idea of enacting this Ordinance had been prompted by the rising number of GBV cases reported in Kampala, noted that these had risen to about 380 every month. “During the second lockdown, GBV cases were very common. In total 550 cases were reported in Kampala alone yet so many usually go unreported. This new law will therefore help in prevention, dealing with perpetuators and ensuring that victims get justice,” he said.

On his part, Sunde Mosh Africa the Chairperson of KCCA Gender Committee and Councillor for Makindye-Gaba Ward welcomed the new law which he said will address the incidences  of violence common in the ghetto areas of Kampala. He noted that the big populations in those areas coupled with their different cultural backgrounds, have commonly resulted into character clashes, breeding GBV within these areas. “We want a special law in Kampala and we are also advocating for harsher penalties for the culprits,” he said.

Ms. Juliet Logose the Central Regional Human Rights Officer took the Councillors through the principles of the Human Rights-Based Approach (HRBA) to local Government Planning/Programming. “While the Commission’s mandate requires that it undertakes capacity building programmes for duty bearers and rights holders to fulfil their duties and obligations, it also requires ensuring the need for all bills presented before parliament and District/Division Council ordinances to be human rights compliant. These bills or ordinances should also aim at giving effective redress to victims of human rights violations and mechanisms for ensuring accountability by the perpetrators. It is therefore against this background that the Commission, under the EU UN Spot Light Initiative Project is undertaking these training programmes in order to ensure that all project implementing Districts/ Local Governments develop human rights based ordinances for elimination of violence Against Women and Girls,” she emphasized.

The Senior Probation Officer, Ministry of Gender Ms. Lydia Nabiryo facilitated the session for the political leaders to review the current situation analysis on Gender Based Violence, challenges and recommendations.

The leaders in attendance were also offered expert training in legislative procedures for development of human rights based ordinances by Ms. Harriet Ityang, the Commissioner Legislative Drafting in the Ministry of Justice and Constitutional Affairs (MOJCA). She later presented the first draft on Prohibition and Prevention of Gender Based Violence Ordinance, 2021 in KCCA for review by the participants.

The Uganda Human Rights Commission has been facilitated to conduct a series of HRBA trainings under the UNDP project, being currently implemented in seven districts of Uganda namely; Kampala, Amudat, Kasese, Kyegegwa, Kitgum, Arua and Tororo.