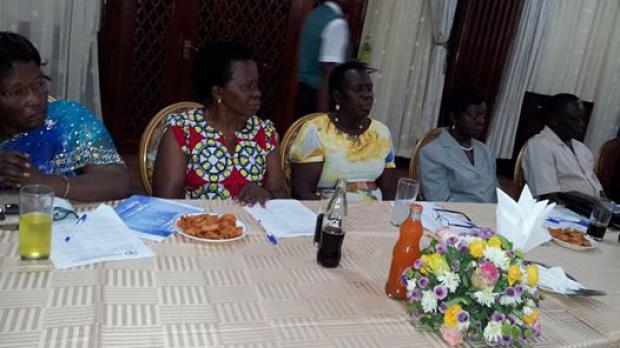 The Uganda Human Rights Commission has published its 16th Annual Report which was today Thursday April 10th 2014, officially launched by the UHRC Chairperson Hon. Med S.K.Kaggwa at a ceremony held at the Imperial Royal Hotel in Kampala.

Today’s launch was preceded by the annual tradition of presenting the Report to the Parliament of Uganda through the Speaker Rt. Hon. Rebecca Kadaga by the UHRC Chairman Hon. Med S.K Kaggwa yesterday Wednesday April 9th 2014.  In addition, Hon. Kaggwa presented a braille version of the UHRC 16th Annual Report to the Speaker of Parliament. The Speaker hailed the UHRC for fulfilling its constitutional obligation of submitting annual reports to Parliament and thanked them producing a braille version of the report for the first time this year.

The 296-page Report with a total of 13 chapters gives a detailed assessment of the state of the human rights in the country during 2013. According to the Report, the Commission received more complaints than the previous year (2012). A total of 4753 complaints were received during the reporting period, compared to only 2725 received in 2012 – marking a 73.76% increase.

Out of the total number of complaints received, 720 were registered arising out of alleged human rights violations. Most of the human rights complaints (424) registered during reporting period (2013) were against the Uganda Police Force, followed by private individuals with a total of 163 complaints out of which 137 were about child neglect (denial of child maintenance).

The complaints registered against the Uganda Peoples Defense Forces (UPDF) were 55 with allegations of Torture and other cruel, inhuman or degrading treatment or punishment being the highest. The Uganda Prison Services (UPS) had 36 complaints against them, while those against the Local Government were 28.

The Report notes that the most registered alleged violation was about the deprivation of personal liberty through detention beyond the mandatory 48 hours.  These were 295 complaints.

The Uganda Police Force has according to the Report been reported the leading culprit with a total of 265 complaints registered against them for allegedly violating the right to personal liberty and detention beyond the 48-hour rule.

It is said in the Report that during the investigations, the police attributed their inability to observe the 48 hour rule to among other reasons; the fear that the suspects were likely to pose a significant risk to /harm the community, offend again or fail to appear before court if not kept in custody. Lack of transport, lack of modern investigative tools and techniques and inhuman and insufficient human and logistical resources were according to the Report, the other reasons attributed to the Police’s increased violation of this right.

The other human rights violation reported to have triggered off another big number of complaints is the violation of the Freedom from torture and ill-treatment which was recorded at 273. These complaints were nonetheless fewer than the reported 303 complaints registered in 2012.

This reduction (of complaints against Torture) has according to the Commission’s analysis been attributed to continuous human rights sensitization programmes for the security organs; increased police responsibility and the enactment of the Prevention and Prohibition of The Torture Act 2012.

Complaints about denial of Child maintenance was  again  prominently featured in this recent  Report  although it is noted there  has been a reduction from 147 registered in 2012 to 137 in 2013.

The other violations registered by UHRC and mentioned in the Report were: denial of basic education (14); unlawful arrest (4), denial of access to a prisoner (4) and unlawful termination of work (4).

Complaints about the violation of the right to privacy of a person, home, property, correspondence and denial of access to food had the lowest number, with only one complaint registered.

On the whole, the increase of the complaints received by the Commission has been attributed to the opening of the new regional human rights office in Hoima, and the mobile complaints handling system by the UHRC staff. The Uganda Human Rights Commission has since its establishment in 1997 been expanding and opening regional offices. It has a total of 10 regional offices which are fully fledged with capacity to provide the core services in respect of the UHRC’s constitutional mandate of receiving, investigating, hearing and delivering judgments, among other functions.

The Report categorized the types and number of investigations it carried out in 2013 and notes that a total of 2068 complaints on human rights violations were handled. Out of these, 1,041 were concluded and either forwarded to UHRC Tribunal for hearing or other institutions for appropriate action while others were closed for various reasons including lack of merit, insufficient evidence to sustain the allegations, false allegations and lack of jurisdiction. The complaints which were partially investigated were 1,027.

On the other hand, the Report also covers a range of other activities carried out by the Commission. Some of the activities reported to have been covered during the reporting period include; assessment of conditions in places of detention, human rights education, outreach and administrative programmes.

The Report has also focused and given highlights on topical human rights issues that attracted public concern and debate during the year 2013 such as; the student’s strike, human trafficking, the state of the media freedoms, freedoms of assembly and demonstrations.

The other human rights issues addressed by the Report include among others; the youth unemployment question, the South Sudan Conflict, the Oil and Gas exploration in the Albertine region and the working conditions of artisanal miners and factory workers. The UHRC’s position on selected Bills such as the Anti-homosexuality Bill 2011 and the Narcotic and Psychotropic Substances (Control) Bill has been highlighted.

The Report also includes an assessment of the government compliance in regard to the several recommendations made by the UHRC over the years.