New UHRC Chairperson and Members of the Commission sworn-in 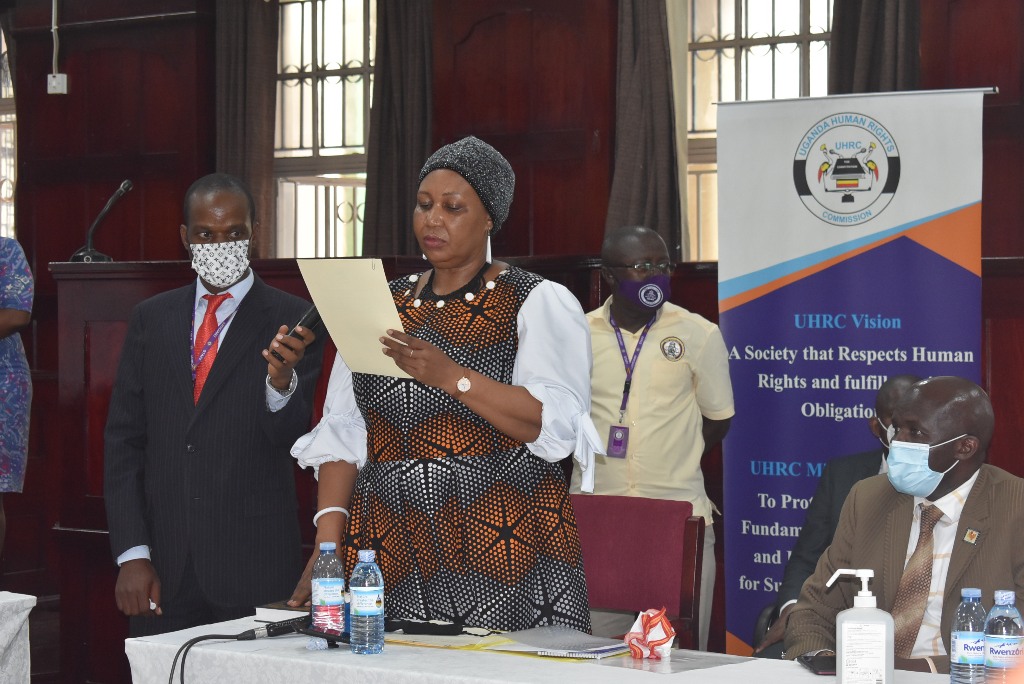 The Chief Justice Alfonso Owiny-Dollo has urged the newly sworn-in Chairperson of the Uganda Human Rights Commission; the four Members of the Commission and; the Commissioner of Judicial Service Commission to stand by the oath they took before him.

In his remarks in the afternoon of Wednesday September 29, 2021 after administering the oath to them at the Judiciary Headquarters at High Court Kampala, Justice Dollo stressed the fact that the mandates of UHRC and the Judicial Service Commission which require them to perform quasi-judicial functions make both institutions critical in the promotion of access to justice by the citizenry. He underscored the need for the decisions made by the tribunals to be implemented.

“Madam Chair, while for you it’s getting back to the UHRC family, the only difference is that you are now in the driving seat and should always remember that the back now ends with you as head of the Commission. It is the duty of the Uganda Human Rights Commission to ensure that they fulfill the aspirations of the framers of the Constitution who deemed it necessary to have a permanent body to protect and promote human rights in Uganda. It is therefore your duty to ensure that you and I, everybody in this country including citizens and non-nationals can go about their lives without having to look back over their shoulders. You must ensure that that we all live in a society where we are at peace with ourselves and with others,” he urged.

He said we live in a society where rights are being abused every day and everywhere before reminding the incoming team to respect the oath they had just taken by dispensing their constitutional mandate without fear or favour. “Without fear means, you have to speak up to authority. If the authority has erred, do not fear to point it out because that is why you have been appointed. If it is an individual who has erred and is feared by everybody, make a decision to bring that person to book. Secondly, is the principle of making decisions without favour. Do not favor anyone in the exercise of your functions and do not favour anyone. You have not been appointed to please anyone, but you have been appointed to ensure that the rule of law prevails in this country. That is the function for which you have been appointed and the function for which on the Day of Judgment the Lord will ask you to account for, after directing the hand of the President to appoint you to judge His people. We can lie to the world, but we can never lie to ourselves and we can never lie to God,” he asserted.

In his remarks, the Chief Justice also counseled the new appointees to avoid mixing their duties with feelings of affection. He noted that whereas we all have friends; belong to certain tribes or political parties, we should always endeavor to put such emotions aside as we execute our official duties. He further cautioned the new team against habouring ill will while performing their work. The Chief Justice emphasized that the oath that the new appointees have just taken bars them from any ill-will even to people who might have wronged them and advised those who are unable to overcome this, to stepdown. “This country needs all of us. I do not own this country any more than the Chairperson of the UHRC or anybody. In terms of owning this country, we are all at par so be firm,” the Chief Justice emphasized.

The newly sworn-in Chairperson of the Uganda Human Rights Commission Ms. Wangadya Mariam in her brief remarks expressed her appreciation to the President and Parliament for finding her and the four new Members worthy to serve their country in these capacities.

“We pledge to you Your Lordship and to the people of Uganda and all stakeholders that we will perform our duties without fear or favour. It is our view, My Lord, that all the Commission’s constitutional functions are equally important, and none of is superior or inferior to the other. We shall therefore equally apply our energies, focus and resources to each one of them without discrimination. I take this rare opportunity to call upon the people of Uganda, to demand for their rights and freedoms while at the same time respecting the rights and freedoms of others and to be law abiding. Duties and responsibilities of citizens are as important as human rights and freedoms. We are also cognizant of the fact that while realization of individual human rights is key; the realization of national peace and security must also not be compromised,” she noted.

The swearing-in ceremony which took place earlier in the afternoon, saw the Secretary to the Commission Ms. Margaret Ejang give the citation introducing each of the appointees to the Chief Justice to take their oath. All of them took two oaths; one of allegiance and another of secrecy. Presenting the nominees one at a time, the Secretary gave brief highlights of their profiles before they took the oath. Ms. Wangadya Mariam before her appointment as Chairperson UHRC, worked as the Deputy Inspector General of Government for eight years. In 1996, she was appointed as a Member of the Uganda Human Rights Commission, a position she held for 17 years. She is an accomplished advocate of the Supreme Court of Uganda and all the subordinate courts.

Other Members of the Commission who were sworn-in included Mr. Lokodo Simon, a former State Minister for Ethics and Integrity and formerly a Member of Parliament Dodoth West Constituency, Karenga District. The others were Mr. Crispin Kaheru, a distinguished human rights activist with more than 15 years of international experience in designing, implementing and evaluating community level elections, human rights, accountability, peace building and conflict resolution initiatives in Africa, Asia and parts of Europe.

Ms. Shifrah Lukwago was also sworn in as a new Member of the Commission at the Wednesday ceremony. She is a distinguished Advocate of the Supreme Court of Uganda and all subordinate Courts. She is also the Vice Chairperson Makerere University Business School Council (2019-2021) and has served on various committees at Makerere University and as a member of the Council from 2007-2012. The other Member Ms. Atuhaire Jacklet before her appointment, has been the Executive Director, Extractive Energy Services Limited. She is a former Member of Parliament for Sheema district in the 10th Parliament, during which she served as a member of the Committee on Science and Technology, Public Accounts Committee and the Committee on Defence and Internal Affairs.

The swearing–in ceremony was also attended by among others the Chief Registrar, Her Worship Sarah Langa Siu; UHRC’s Commissioner Hon Meddie B. Mulumba and some Directors and Managers from the Commission. The ceremony was crowned with a Kodak moment with the Chief Justice at the Eastern Wing of the High Court.

In her introductory remarks, Ms. Ejang congratulated the new team on their appointment by the President and outlined the brief programme of the day which included presentation of office spaces and other tools of work to the new team. Hon. Mulumba added his voice to that of the Secretary in congratulating and welcoming the new appointees whom he observed were eminent persons in the country. In his brief remarks, he highlighted some of the key challenges faced by the Commission during the period when it had no substantive Chairperson following the demise of Hon. Med S.K Kaggwa in November 2019.

“We have on some occasions been challenged by some entities like Parliament and the Ministry of Finance who questioned whether the Commission was fully constituted without a Chairperson,” he said.

After the brief interaction in the boardroom, the new Chairperson and Commissioners were taken around the UHRC offices at Twed Plaza and introduced to staff by the Secretary to the Commission. They were later shown their respective offices and led to the parking yard where their official cars were handed over to them. The grand welcome to the UHRC offices was crowned with a luncheon at Piato Restaurant for the new team before heading to the High Court, Kampala for the swearing–in ceremony.

The Commission is the policy-making body of the Uganda Human Rights Commission while the day today administration is done by the Secretary to the Commission who is also the Accounting Officer.