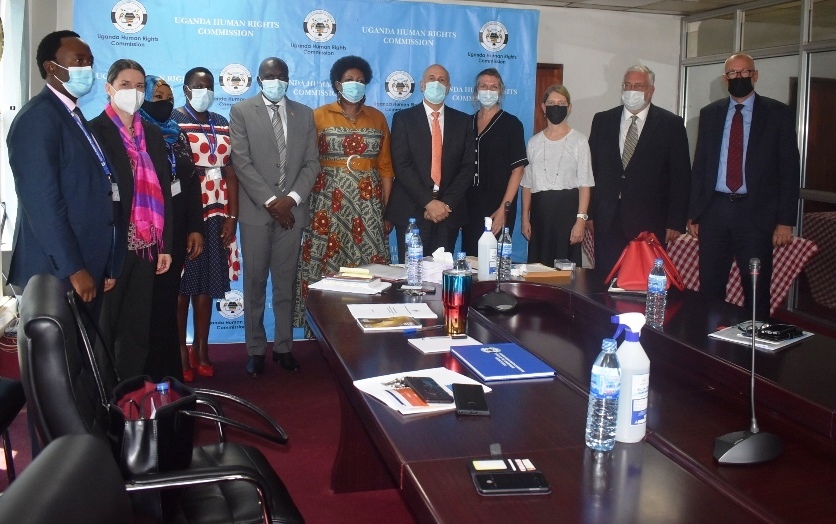 A delegation of Ambassadors under the European Union (EU) paid a visit to the newly appointed Chairperson and Members of the Uganda Human Rights Commission (UHRC) on Wednesday October 28, 2021. Led by the Head of European Union Delegation in Uganda H.E Attilio Pacifici, the eight-member delegation was welcomed to the UHRC Head Office at Twed Plaza on Lumumba Avenue by the new Chairperson Ms. Mariam Wangadya.

“The EU is one of the institutions that fund the Commission so they requested for this meeting with us. It was one of those normal routine meetings,” Ms. Wangadya told the press after the meeting.

The visiting delegation of Ambassadors were happy that the Commission was now fully constituted and were optimistic that it will now effectively perform its constitutional functions as the National Human Rights Institution (NHRI). They congratulated the UHRC’s new team and urged them to urgently address teething human rights concerns such as the rampant cases of Gender Based Violence; unfavourable working environment for CSOs; tribunal backlog; continued closure of schools and Uganda’s response to Universal Periodic Review recommendations  which is due for January next year. Ms. Wangadya said the delegation particularly urged the Commission to prioritize holding of Human Rights Tribunal sessions to address the issue of backlog and to deliver the much needed justice to the indigent Ugandans who have waited for too long.

“They sought to know from the Commission which is one of the major beneficiaries of DGF, how the suspension of the fund had impacted delivery of its activities and the reason for government’s continued position. We will definitely engage the Minister of Foreign Affairs and other concerned authorities to find out the most current position on operations of DGF in Uganda. We are equally concerned about the continued closure because DGF used to fund most of the commission activities especially at field office level,” she revealed.

“Judicial officers have the discretion to grant or deny bail,” she said, before allowing Commissioner Mulumba to supplement. Hon. Mulumba said that since one of the Commission’s mandate is to review Bills before Parliament to ascertain their human rights implications, provisions of the said proposals will also be scrutinized after the bill is presented before Parliament. “When it becomes a Bill, that is when the Commission will review its provisions to ensure that rights are not interfered with,” he said.

The visit which was the first one to be made by development partners, happened after the Commission was fully constituted barely a month ago, after spending close to two years without a substantive Chairperson. Apart from H.E Attilio Pacifici who led the delegation, the other members of the visiting team were; the Ambassador of the Kingdom of Netherlands H.E Karin Boven, the Ambassador of Belgium H.E Veestraeten Rudi, the Ambassador of Sweden H.E Maria Håkansson, the Ambassador of Germany H.E Mathias Schauer, the Head of Office of Austria Development Cooperation Dr. Roswitha Kremser, a representative of the Ambassador of Denmark Mr. Henrik Jespersen and the Programme officer at the European Union delegation Mr. Cathal Gilbert.

The UHRC team led by the new Chairperson was comprised of Members of the Commission namely Hon. Meddie Mulumba, Hon Jacklet Atuhaire Rwabukurukuru, Mr. Crispin Kaheru and Ms. Shifrah Lukwago. Also in attendance was the Acting Secretary Ms. Margaret Ejang and other staff from the Office of the Chairperson and the Public Affairs Unit.