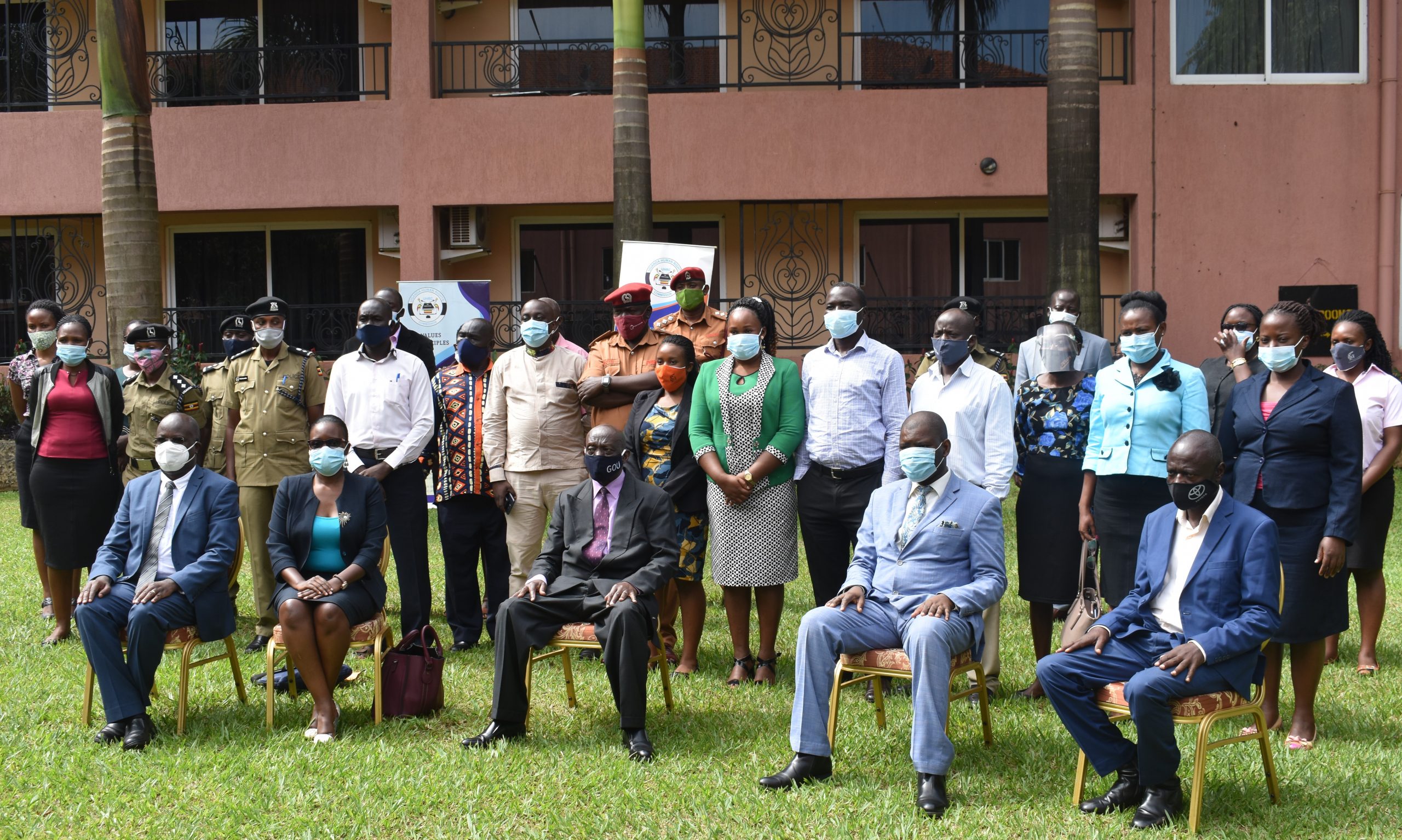 “The Commission is mandated under Article 52(2) to establish a continuing programme of research, education and information to enhance respect of human rights. As such, the Commission has embarked on popularizing this law which was assented to by the President in March 2019, beginning with you duty bearers from security agencies, law enforcement, Judiciary, Directorate of Public Prosecution and public defenders because you are key in the implementation of this Act,” Juliet Logose, the head UHRC Central Regional Office stated in her introductory remarks. She thanked the participants for turning up and also gave an overview of the Concept of Human Rights; the definition and characteristics.

This popularization catered for duty bearers from the Central Region of Uganda and other trainings are slated to be conducted in Amudat, Kasese, Kyegegwa, Kitgum and Tororo districts. While officiating at the opening of the two workshops, the Acting chairperson UHRC, Dr. Katebalirwe Amooti Wa Irumba said the Commission is banking on the rights holders in the above category to actualize the objectives of this law and to ultimately improve the general observance of Human Rights in Uganda.

“The Commission welcomed the enactment of this law. This law represents the single, most comprehensive instrument for the enforcement by the courts, of human rights as were enshrined in the Constitution in 1995. It expanded the rights holders’ latitude for redress from the courts for human rights violations since it gave effect to a constitutional provision that had not yet been comprehensively operationalized. It also represents the ever difficult struggle against impunity,” Dr. Katebalirwe stated.

“It complements other national and international mechanisms of enforcement of human rights, most of which are applicable to Uganda. Most importantly, it is a demonstration of government’s commitment to enhancing access to justice which makes its implementation all the more critical for justice to be observed and be seen to be served, with proper accountability on the part of perpetuators of human rights abuses,” he stated. He said the Commission was optimistic that after this training and other capacity building activities around the HREA, 2019, the duty bearers will increasingly implement it and the rights holders will seek to use it so that violators of the rights enshrined in the Constitution and other instruments can face the consequences.

The Director Research Education and Documentation (D/RED) Mr. Byonabye Kamadi, who also moderated some of the sessions at the training, assured the participants that they were not at the training to apportion blame, but to find mechanisms of having this law known by both rights holders and duty bearers.

“We cannot take this law to the local person before you at the national level can know it. This is one of the effort to make this law known,” he stated.

On her part, the Director Complaints, Investigation and Legal Services (D/CILs) explained to the trainees why it was necessary to enact the HREA. She said, previously, the state operated on the principal of Vicarious Liability whereby when an officer of government violated a right in the course of duty, it would be government to be sued and pay for the wrong.

“Later, there was the enactment of the Prevention and Prohibition of Torture Act (PPTA) 2012 which placed liability to an individual officer. This necessitated the passing of this act to provide for the procedure through which a victim of human right violation could seek redress in court. This Act does not take away the powers of the UHRC and the Equal Opportunity Commission (EOC) to handle human rights complaints. One can still file a complaint with us,” she stated.

Human Rights Lawyer Nicolas Opiyo who was one of the facilitators said the HREA is the most revolutionary law Uganda has passed as a country. He said the Act says anybody will go to jail if any right is abused or threatened.

“It doesn’t matter whether there are other avenues through which the complaint can resolved. The other thing that this law dealt away with was the issue of technicalities and procedure. Whether the matter is filed in a wrong court or following a wrong procedure, the judicial officer is mandated to hear it regardless,” he stated.

He said the Act also introduces the principal of Amicus Curiae (a friend of court) whereby any judicial officer hearing a human rights matter can call in anybody with knowledge of the subject matter to appear as a friend of court to bring in information that can guide reach a just decision. He said the law also catered for jurisdiction whereby complaints related to violation of non-derogable rights under Article 44 of the Constitution are filed in the High Court and the rest in the Magistrates Court.

While closing the first session on Thursday (Nov. 12), the Nabweru Court Chief Magistrate Patricia Amoko said she had become more called upon participants to be passionate about protecting Human Rights.

“By virtue of the offices that each of us hold, by virtue of our mandates, I would like to sound call for each of us to be passionate about protecting Human Rights; let’s be zealous about it as opposed to being bystanders or being passive about the whole subject of protecting Human Rights. I dare say that when you do nothing about protecting Human Rights, you are as bad as the person causing that violation. If for no other reason, the reason that we should pay attention to this act and preserve human rights is because one day, we the hunters could easily become the hunted,” she stated. She thanked the UHRC and UNDP for meeting the expectation of everybody who attended the training.

On his part, Eron Kiiza who facilitated in the second (Tuesday) training highlighted cases where police officers have been ordered to, personally compensate victims of human rights violation. He said this Act makes everybody subject to it, save for the President. He said the Act has created an elaborate procedure on how to proceed in case of a human rights violation, which was not the case before.

“The Act empowers you the in-charge of prison or the in-charge of a police station to release any person who has been unreasonably detained beyond 48 hours and we are looking forward to seeing an officer who will stand up and enforce the provisions of this Act,” he said.

He said this Act is not about the powers that be or orders from above, it is about enforcement of the law.

Nakawa Chief Magistrate, Dr. Doughlas Singiza who closed the second raining said this Act creates another workload as an enforcer yet it is already grappling with case backlog. He wondered whether the Human Rights Committee had debated the possibility of creating a separate court to enforce this Act as it is in South Africa where they have an Equal Opportunity Court. He urged the UHRC to consider pushing for the establishment of such a court.