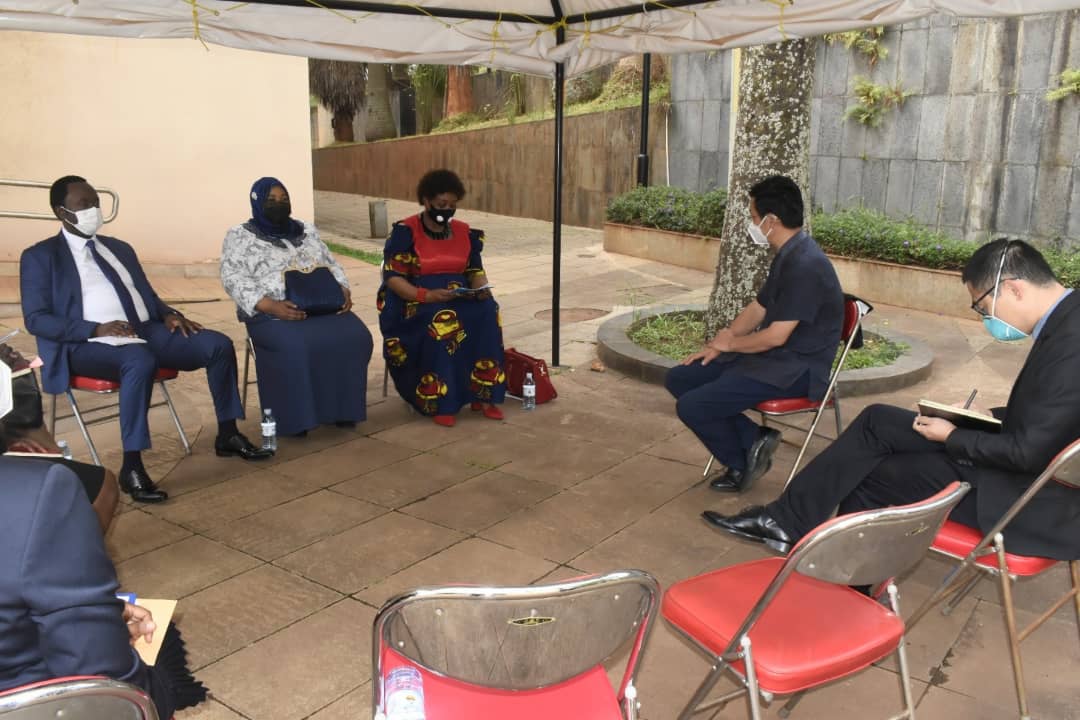 The Chinese Ambassador to Uganda H.E Zheng Zhuqiang has applauded the Uganda-China long standing cordial diplomatic relationship and pledged support to the Uganda Human Rights Commission (UHRC). During a courtesy call on him on Tuesday 16th August 2022 by the Commission, the Ambassador revealed that in spite of some challenges, China has made a lot of progress in the promotion of human rights.

“We believe that development is critical in achieving human rights because poverty limits one’s ability to exercise their rights. We therefore view development as the key to solving several problems. As a country, we have made progress in eliminating extreme poverty amongst our people. We therefore support African countries to develop human rights standards according to their own conditions and that is why we offer them unconditional support and do not interfere with their internal issues,” he said.

He revealed that Uganda has been a strategic partner especially during the UN General Assembly when it voted for China becoming a permanent member of the UN Security Council, among other many high-level decisions. China, Mr. Zhuqiang said, has made it a norm to collaborate with other countries but it to take effect, the collaborating party must recognize that there is only one China. He said whereas the United States of America started a deep relationship with China in 1978, making it one of the 181 countries which have signed a joint communique recognizing that Taiwan is part of China, there have been acts of provocation from the US of late, pitting China against Taiwan. “Taiwan is very important to us and we have to exercise our right to safeguard our territorial integrity against any form of provocation through Taiwan,” H.E Zhuqiang asserted.

He expressed concerns that some developed countries had passed policies which bar manufacturing companies from getting assistance from China which to him was a clear violation of international relations and a violation of the right to development. He went on to reveal that China has kept Covid-19 prevention high on its agenda because like any other country of the world, it was badly hit by the pandemic which inevitably affected the country’s development.

The UHRC Chairperson Ms. Mariam Wangadya who was in the company of three Members of the Commission namely Hon. Crispin Kaheru, Hon. h Lukwago and Hon. Jacklet Atuhaire appreciated the Chinese government support to the Commission especially the items received in December last year as well as the financial assistance and other support to Uganda as a country.

“As a Commission, we monitor the state of human rights including rights of migrant workers in the country, of which several are from China. Whereas the Commission continuously advocates for the right to work for all the people in Uganda, we strongly call for safe and healthy working conditions including the provision of protective gear during work which must be respected at all times,” she said.

She decried the negative effects of climate change in Uganda that have brought about natural disasters like floods especially in the Elgon region where the Mbale Industrial Park infrastructure established by China was recently not spared. She pointed out the concerns of the Commission with regard to the recent floods in the Elgon region which had regrettably resulted into a number of human rights violations including food insecurity in the country; violation of the right to life, property, health, and a clean environment among many other rights. The Chairperson called for support to the Commission in particular and government in general to make benchmarking visits to China to learn how they have been able to solve food insecurity and alleviate poverty.

Ms. Wangadya appreciated the Chinese government for the establishment of the China-Uganda Friendship Hospital in Naguru; the Industrial Park in Mukono; the first Children Hospital in Mbale; the African Union Complex in Addis Ababa, Ethiopia; and the various scholarships offered to students from Africa.

On the need to promote the principle of local content with regard to employment of Ugandans by Chinese companies in the country, as raised by Hon. Atuhaire, the Ambassador concurred with her and assured the UHRC team of the critical role his office plays in ensuring that companies fully comply with the laws and regulations of the host country.  He noted that that employing Chinese oversees is more expensive compared to utilising the available local human resource. He however alluded to reports by many Chinese companies of the absence of technical human resource in some countries.

In reference to assessment of the conduct of Chinese companies operating in Uganda, the Ambassador cautioned against blanket conclusions and guided that a line should always be drawn between the Chinese government owned companies and those that are purely private.

The Ambassador underscored the fact that because Uganda is a very strategic partner in the promotion of regional peace and security, China has been and will continue offering it support to promote stability. He also pledged support to the Uganda Human Rights Commission.

UHRC pays tribute to Late Queen Elizabeth
UHRC Bids farewell to UN Human Rights-Uganda boss
UHRC vouches for informed consent of donor in Human Organ Donation and Transplant Bill, 2021
A word to my Kenyan brothers and sisters ahead of  their election